WDIY | By Mike Flynn
Roseto | What's in a Name?

On this episode of What’s in a Name?,  Mike Flynn takes another dive into Lehigh Valley history as he visits the Northampton County borough of Roseto, founded by Italian immigrants in the late 19th century.

As part of his investigation, Mike speaks with Dr. Judith Lasker, Professor Emerita in Sociology and Anthropology at Lehigh University about the “Roseto Effect,” a social and health phenomenon identified in, and named after, the borough in the late 1950s.

Learn more about the many landmarks and locations around the Lehigh Valley on What's in a Name?, with new episodes airing the last Thursday of every month at 5:44 PM during All Things Considered. 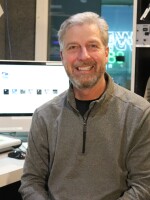 Mike Flynn
Mike Flynn is a local host for WDIY's Thursday broadcast of NPR's All Things Considered. He has been listening to public radio since he was student teaching in the early 1980s. Public radio and, in particular, NPR news helped him tremendously as a history teacher at Emmaus High School. Now retired, he wants to help the station that helped him. He feels honored to be able to share what he calls a treasure with his community.
See stories by Mike Flynn
Related Content