Mike Marvin of the iconic folksinging group, the Kingston Trio, talks with Steve Aaronson about the group and their upcoming concert at the Sellersville Theater on Friday, November 5, 2021. Marvin is a cousin and surrogate son of Kingston Trio founding member Nick Reynolds, who also acted as Marvin’s musical mentor.

On their tour, coming to the Sellersville Theater on Friday, the trio's current members – Marvin, Tim Gorelangton, and Don Marovich – will celebrate the band’s storied career. The other two current members have intrinsic links to and experience with the original group as well. Gorelangton, a close friend since boyhood, is one of the few musicians outside of the trio who has recorded with founding member Nick Reynolds; Don Marovich has also toured with the original trio.

Tickets and information for the group's performance at the Sellersville Theater are available at the venue's website.

Over 60 years ago, the group's founding members – Dave Guard, Nick Reynolds and Bob Shane – helped ignite the folk music revival of the late 1950s with the release of their self-titled debut album which entered the Billboard album charts, propelled by the single “Tom Dooley.” 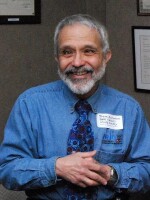 Steve Aaronson
Steve Aaronson came to WDIY, straight out of the U.S. Department of Labor, in 2002. He has been a member, and a volunteer, ever since. Steve’s main love is Golden Age folk music, and he has been the host of Folk Classics since 2006. You can also hear him hosting Morning Edition on Wednesdays, Fresh Air on Tuesdays, and occasionally on public affairs programs like Lehigh Valley Art Salon. He also co-hosts Swing Sunday twice a month, with Rosalie Viscomi.
See stories by Steve Aaronson
Related Content