This month’s Celtic Cultural Minute will feature information about the educational activities available at this year’s Celtic Classic; running September 27th through the 29th at the Historic Industrial Quarter in downtown Bethlehem.

Social Dancing back again! This year, located at Moravian College’s Foy Hall on Saturday afternoon, after the Scottish Highland Dance Competition is over.

Irish Ceili Dancing will be from 2 to 4:00pm; the first hour for children, and the second hour for adults. Dances will be lead by the O’Grady Quinlan Academy of Irish Dance with the support of the West End Ceili Dancers

Ceili Dances are from the official book, “Ar Rince Foirne” published by the Irish Dance Commission in Dublin. Ceili’s use step dancing moves. Arms are held at the sides unless holding the person’s hand next to you. Some of the dances have been danced for hundreds of years. They are danced in squares of couples, lines, circles or long ways sets.

Set Dances have been danced in Ireland for about 200 years. They descended from the French quadrilles, which were brought to Ireland by the British army and landlords. Irish people adapted them to their own style, adding Irish steps and music. Sets were informally learned in the home with everyone dancing, including children.

After Ceili dancing, from 4:30pm to 6pm, Contra Dancing will be lead by the Valley Contra Dance Group.

Contra Dancing is an American folk art and recreation that descended from the country dancing of England, France, Scotland, and Ireland in colonial times. It is partnered dance in a basic formation: two long lines that are face opposite each other or “contra.”  Similar to square dancing, contra dances are led by a caller, as are the moves: allemandes, stars and partner swings. Unlike square dancing, dancers usually change partners from one dance number to the next, there’s always live music and casual dress is welcome. Contra music is lively, consisting mainly of marches, polkas and Celtic jigs and reels. As forms of dance go, contras are easy for beginners because there are practices (or “walk throughs”) before each dance number. There are no special steps, you just walk in time to the music. While that may sound overly simple, there is a wonderful physical flow in the sequence of moves. Donna Hunt will be the caller for the Contra Session this year.

The band, ACED will accompany both Ceili and Contra dance sessions.

Thanks to the West End Ceili and the Valley Contra Dance Group for their partnership in keeping social dancing alive at the Celtic Classic. For the Celtic Cultural Alliance, I’m Silagh White. Slainte! 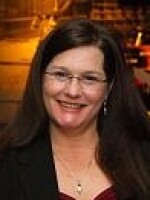 Alison DelRe
Alison has been a fan of WDIY since the station went on the air in 1995 and joined the staff in 1998. She loves many things about her job, including its wide-range of duties. She coordinates volunteer activities, manages events and partnerships, assist with development, arranges ticket give-aways and "other duties as needed."
See stories by Alison DelRe