Nick talks about how the Kindertransport rescued Jewish children from Germany and sent them to England, where his grandparents met and married. Tama then describes how her feisty grandmother joined the Polish resistance effort, which was depicted in the film "Defiance" (starring Daniel Craig). 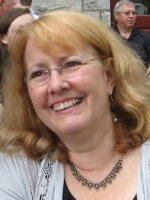 Marcie Lightwood
Marcie Lightwood came to WDIY to set up the first on-air membership drive, and has stayed with the station ever since. She is a self-employed social worker, specializing in parenting education, working with people in poverty and group facilitation. Currently, Marcie coordinates the NPR news hosts, hosts Morning Edition Monday and serves as a substitute for Celtic Faire, Folk Classics and Assorted Women. She is the mother of four grown children and lives in Allentown.
See stories by Marcie Lightwood
Related Content