Karen Feridun is the founder of Berks Gas Truth, a grassroots community group fighting shale gas drilling in Pennsylvania. Her organization is one of the co-sponsors of a special screening of the new documentary Gasland, Part 2 on June 17th at the Broughal Middle School in Bethlehem.

What makes this screening special?

Thank you for having me. The screening is special for a couple of reasons. Josh Fox, who directed Gasland, Part 2, will be here for the screening to take questions following the film. What makes the event even more special is that Bethlehem is one of only 20 cities in the U.S. where Josh will take his film before it premiers on HBO in July. We’re thrilled to have Josh back in the Lehigh Valley.

For people who haven’t seen Gasland, explain what it’s about.

Gasland was the film that brought the issue of shale gas drilling or fracking to the national consciousness. Fracking is short for hydraulic fracturing, but it’s frequently used as short hand for the entire footprint of natural gas extraction from shale formations. Josh’s first film looked at the process and some of the risks. Many people are familiar with the sequence in Gasland where a series of homeowners light their tap water on fire. The new film picks up where Gasland left off by examining the long term consequences of fracking, but it also looks at the natural gas industry and the tactics it employs in the face of opposition and at those of us who are presenting that opposition.

The film’s release comes at a time when increasing pressure is being put on our state government to put a moratorium on fracking. We recently delivered over 100,000 petition signatures calling for a moratorium on drilling to Governor Corbett. We’ve learned a lot in the three years since Gasland debuted. We’ve seen case after case of contaminated water -- water that gels or comes out of the tap looking like iced tea. We’ve seen increasing numbers of sick and dying people and animals. We’ve seen well blowouts. We’ve seen record incidences of radiation alarms sounding at landfills when frack waste trucks arrive. We’ve seen some of our most beautiful woodlands razed to make room for well pads or pipelines. We’ve seen regulatory agencies fall down on the job of protecting our people and our natural resources. We’ve seen job creation numbers fall way short of where we were told they’d be. We’ve seen a proliferation in transmission pipelines designed to ship our domestic energy source to ports where it can be liquefied and sent overseas. We’ve seen the CO2 level rise to an historic 400 PPM. Methane heats the atmosphere more efficiently than CO2 so we should be cutting back on it, not relying on it more. And those are just some of the problems. We’re very grateful to Josh for shining a spotlight on this extremely important issue.

So tell people more about the upcoming screening.

Gasland, Part 2 will be shown on Monday, June 17th at the Broughal Middle School on the corner of Morton and Brodhead on the southside of Bethlehem at 6:30 p.m. and will be followed by a question and answer period with Josh Fox. We’re pleased to be able to invite the public to attend this special event free of charge, though we will be gratefully accepting donations to defray the cost of the venue. The event is co-sponsored by Food & Water Watch, PennEnvironment, the Lehigh Valley Group and PA Chapter of the Sierra Club, SouthSide Film Institute, Lehigh Valley Gas Truth, Berks Gas Truth, the Alliance for Sustainable Communities, and LEPOCO. For more information, visit gastruth.org or call 610-923-6341. 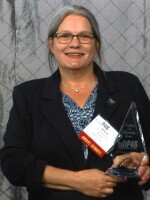 Alison DelRe
Alison has been a fan of WDIY since the station went on the air in 1995 and joined the staff in 1998. She loves many things about her job, including its wide-range of duties. She coordinates volunteer activities, manages events and partnerships, assist with development, arranges ticket giveaways, and "other duties as needed."
See stories by Alison DelRe