Elementary School 1st Place: When This Is All Over by EllaMary Groller

When this is all over, I’m going to the mall, to Vera Bradley Where I’ll touch all the bookbags and lunchboxes All the red, yellow, and pink splatches of color and sleek designs. And I’ll see my friends. I’ll touch them, too! And we’ll have sleepovers again. We’ll go to bed at eleven, We’ll eat junk food right out of the bag and not even care about germs. We’ll paint each other’s nails, laughing and talking about boys. We’ll sit close together, much closer than 6 feet, #notsocialdistancing. We’ll listen to music and dance, Fortnite dances, The Hype and the Orange Julius, our arms crisscrossing. Cool kids! And we’ll laugh outloud! We will lie on the floor, cross our arms, And when a friend pushes down on us Our true laughter will explode in the air! I’ll eat a restaurant again, like Torre, Guacamole and chips Mango and coconut ice tea Cool delight on my throat Of course, I’ll go with my friends. We’ll have a contest to see who can drink the mango tea faster. Somebody will probably spit it out and it’ll be funny, Loud laughs that make our cheeks hurt from scrunching up From so much … JOY!

icarus as a love story icarus as a boy, young and in love and fallen not from grace but into the depths of it. icarus as a boy who fell not because of his arrogance but because he wanted to. because he had spent his whole life holed up in the dark, so what could make him feel more alive than a single moment of blissful freedom, so pure that it has never been shared by another man. what could he long for more than apollo’s tender kiss, for his rays to shine bright upon his pale and dull skin, for his flesh to prickle at the freezing rush of wind flying past him, for the sweet and merciful burial found in poseidon’s deep. father, forgive him, but icarus was in love. boy grown in shadows and boy slain by sun.\ sometimes you spend your whole life wishing for something and never even get to taste it. sometimes you die with dreams hollow and moth-eaten in the back of your heart. icarus swallowed his dreams whole. juice running sticky and sweet down his bony fingers, a boy so starved that he ate the whole world. (his eyes were always bigger than his stomach) he sits at apollo’s feet now, sun-kissed and tanned and happy and tired of being painted as the fool. he did what so few had the courage to do, and devoted himself entirely to that which he longed for. icarus as the boy who never learned how to do things half-way. the boy who was told to stay between the sun and the sea and instead he touched both. who was told to stay afloat so he drowned himself in the tides of his desires, woke to apollo’s beaming face and warm hands, saying, “i was trying to give you something better.” and icarus cups the god’s face. he is not afraid because he does not know how to be. apollo glows warm. icarus traces his dark cheekbone, says, “what could be better than this?” and he speaks the truth, for now he sits in apollo’s concert halls, has heard a thousand symphonies, been the subject of millions of poems, boy made of marble and boy carved into stone. boy of sun and sea and sky. icarus flew not to run away but to run towards something intangible, something he longed for. father thank you for the wings but your son is made of starstuff. icarus flew for love, love, the whole time, it was for love.

Tune in to Lehigh Valley Arts Salon every Monday from 6:00 to 6:30 PM following All Things Considered. 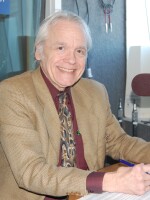