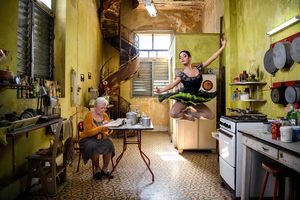 Joe McNally, The Assignment Guy: The Long Haul of a Photography Career Shooting Just About Anything
Joe McNally became a professional photographer in 1978. Starting with newspapers, and moving onto magazines and commercial work, he has been thrown the kitchen sink of assignments, from news and sports, to big production jobs, celebrity portrait sessions done in less than five minutes, to assignments from the National Geographic that went on for a year. He is still shooting assignments, and has moved into directing video. Known as a candid and humorous presenter, Joe will show work and discuss the ups and downs, the successes and the failures to be had when encountering the world with a camera in hand.

Biography: Joe McNally is an internationally acclaimed, award-winning photographer and filmmaker whose prolific career includes assignments in 70 countries. McNally won the first Alfred Eisenstaedt Award for Journalistic Impact for a LIFE coverage titled, “The Panorama of War.” McNally has been honored numerous times by Communication Arts, PDN, Graphis, American Photo, POY, and The World Press Photo Foundation. McNally is masterful at lighting and is known for his large-scale production work, in addition to his vast storytelling experience which stems from assignment work for legendary publications such as LIFE and National Geographic. His work is regularly cited in social media surveys as sources of inspiration and industry leadership.