Scientists are taking a second look at the role that wetlands play in climate change. Coastal wetlands absorb a lot of carbon, which is good, but new research in Delaware finds they also release a lot of carbon. They might release even more with a warming climate. Sophia Schmidt of Delaware Public Media has this encore presentation.

SOPHIA SCHMIDT: It's a cloudy, breezy day at the tidal wetland near Dover, and researchers from the University of Delaware gather on a boardwalk to look at a computer screen. A line graph squiggles up and down, showing data in real time.

UNIDENTIFIED PERSON: And then you can see it's fairly steady. There's some fluctuation, but that's...

SCHMIDT: The computer's hooked up to a tower that looms above the winding creeks and tall grass is still brown from the winter. Ecologist Rodrigo Vargas is the lead researcher.

RODRIGO VARGAS: This is a metrological tower that measures the breathing of the estuary.

SCHMIDT: That breathing shows how greenhouse gases move in and out of the marsh during different growth phases of the marsh grass. Overall, the researchers expected to find that over three years, the marsh was sequestering carbon, but they got a surprise. It was the opposite. And that raises a lot of questions.

VARGAS: I believe we are challenging a paradigm. Wait a minute. What we expected is not as consistent as we thought.

SCHMIDT: The key appeared to be in the wintertime when Vargas' team found the balance flipped. The marsh plants, which suck carbon dioxide out of the air, were dormant. But microbes, which eat buried plant matter and then release CO2 and methane, another greenhouse gas, they kept on munching. Vargas says some researchers tend to do field work only during the warmer months. And now it seems like that's not the full picture.

SCHMIDT: The amount of carbon the marsh released was small, and it's too soon to say what's behind Vargas' results. But one possible factor is the warming climate.

TOM O'HALLORAN: I think there are some places where coastal salt marshes will not be a sink, or they might be a sink now but not maybe in 30 or 50 years from now.

SCHMIDT: Tom O'Halloran of Clemson University studies wetlands, too. He says higher temperatures are expected to make both the wetland microbes that emit carbon and the plants that absorb it more active. That could throw things off. Then there's the threat of rising waters.

O'HALLORAN: Coastal marshes, salt marshes like this are experiencing different levels of sea level rise all around the world, depending on the region. But all marshes have to maintain their elevation relative to local sea level rise or they will essentially drown.

SCHMIDT: O'Halloran is doing work at a salt marsh in South Carolina. Right around his monitoring equipment, the creeks are growing wider and the marsh grass is thinning. He thinks he'll probably find the area sequestering less carbon as a result. But so far, the Delaware marsh seems to be keeping up with the rising tides by building up sediment. Rodrigo Vargas and his team plan to keep studying the marsh to figure out why it's been emitting more carbon than they expected.

VARGAS: This could be important for also forecasting what will happen about these ecosystems in the future.

SCHMIDT: Were the surprising emissions temporary or a sign that these crucial ecosystems could switch from helping offset climate change to making it worse? 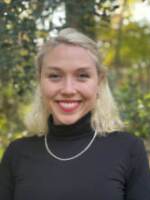 Sophia Schmidt | WHYY
Sophia Schmidt is a Delaware native, and covers the environment for WHYY’s PlanPhilly. Before coming to Philadelphia in 2021, Sophia reported on her home state of Delaware for Delaware Public Media and produced interviews for NPR’s “Weekend Edition.” Sophia was a 2021 Metcalf Fellow.
See stories by Sophia Schmidt | WHYY